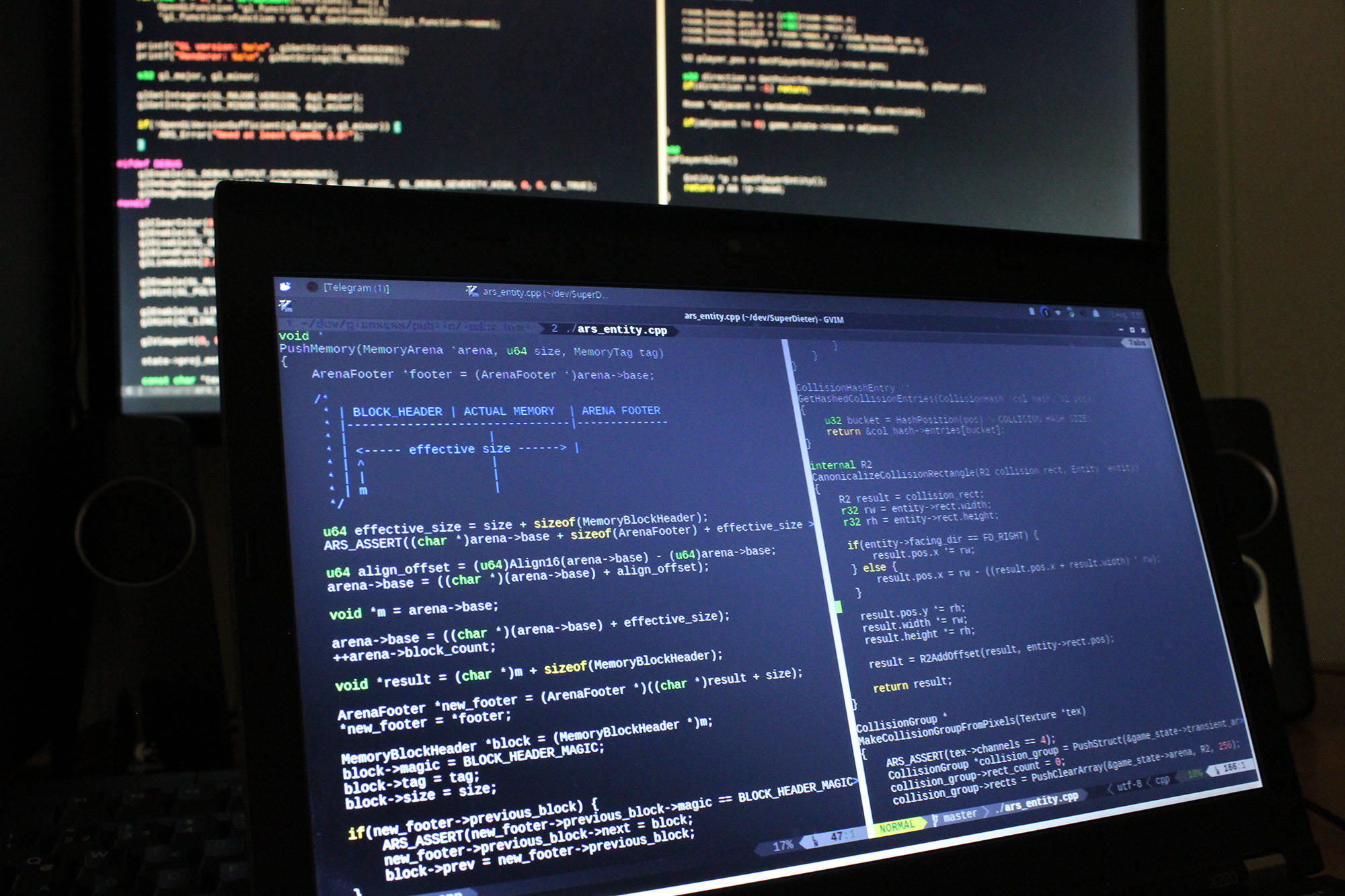 Developing games in C/C++ is a tedious process. Things like compiling take ages and in-game bugs are hard to debug and fix. And the vicious cycle of compiling, restarting, and backtracking destroys focus and productivity.

To solve this problem, most implement a scripting language: Lua for instance is quite popular with game developers. One can reload game scripts at runtime without having to restart the game. In this way AI code for a monster could be written and tested seamlessly. A huge win!

But there is a catch.

So what if we could write our game entirely in C and reload our code instantly, leaving things “hardcoded”?

Sometimes the solution is a complete revamp. Split the engine into two pieces. 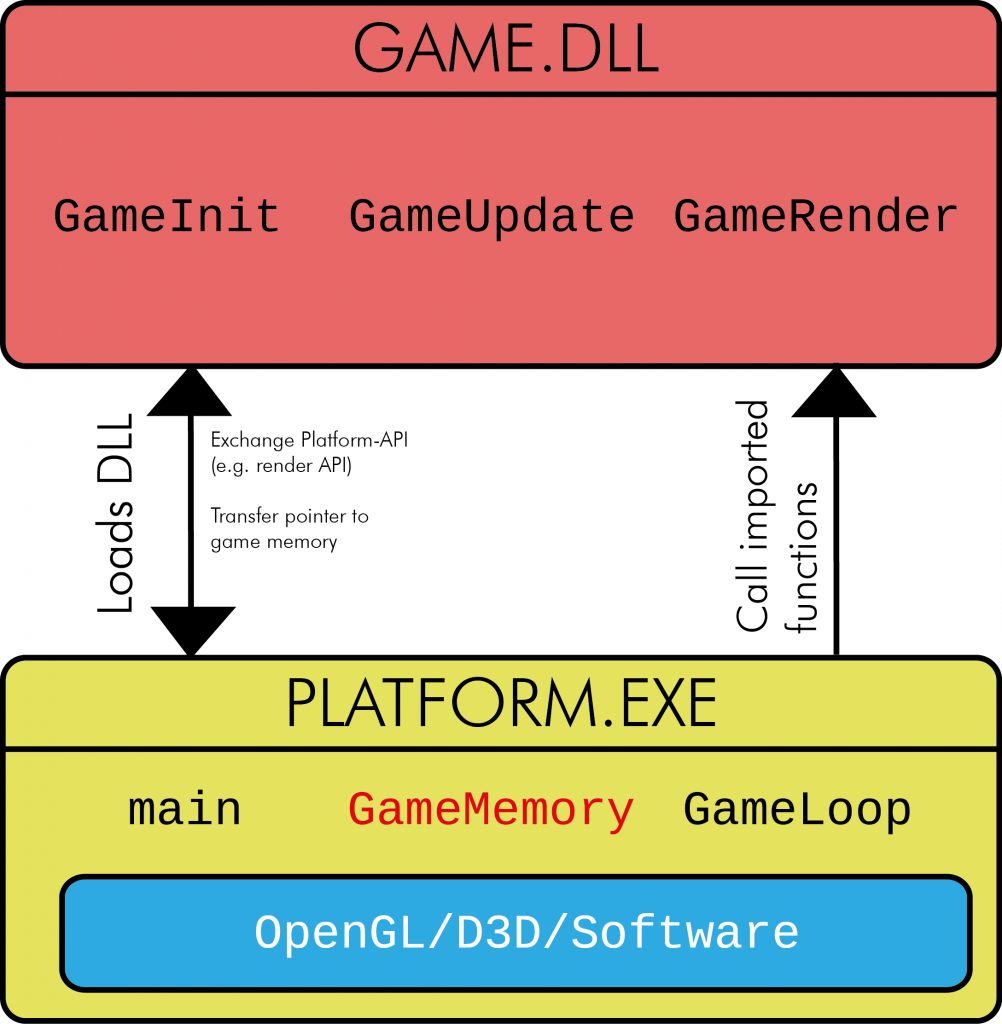 The problem is not C, the problem lies in monolithic architectures. If both game logic and engine are hosted on the same executable, there is no way to reload one thing while keeping the other running. Thus we need to split both pieces into separately compileable layers.

In summary: the challenge is to architect your engine to maintain the game code in a library which essentially be hot-swapped live.

How do we do this? First stop and think about the what role memory has to take in a design like this. What can we do to keep the game state intact when reloading the code? Allocating memory on the game side is a no since its heap would be destroyed once we unload the library.

_Solution: _allocate all game memory on the platform layer and pass it to the game on each reload. This poses another challenge because it implies manual memory management, but more on that later.

In this way, we can abstract the platform-specific parts of the engine.

I’ll document a sample engine for demonstration purposes. The following code examples will be in C (actually just C-like C++ utilising some of C++’s shortcuts such as eliminating the need to typedef structs etc.), but other native language should work as well!

You should always consult my repo as reference if things are not working.

The project layout as follows:

Let’s start with common definitions for both layers. These will be placed inside shared.h.

Game memory will only need to use a simple stack allocator. This technique proves fine for most games, and game objects or entities can be pre-allocated inside a pool for instance.

This basic game layer does not much except implement the basic game API. But to demonstrate the hot-swapping feature we will make the game display a diagonally moving white box.

Later you will be able to change the hardcoded velocity of the box (as defined in GameUpdate) while the game is running and see a change instantly!

In the GameInit function we first make use of our memory functions in order to allocate the game state on the platform’s stack memory. We then grab a copy of the platform API and store it.

In GameUpdate we apply a certain velocity to our box’s x and y-values. Finally in GameRender we draw the box using the platform API.

A cryptic but essential part is:

The very first time GameInit is called, our game’s memory has not yet been written to yet and is thus filled with zeroes (this is not related to the fact that static variables are cleared at start rather that the supplied memory itself is cleared at start). Therefore if state->memory.ptr is null, that means our game state’s memory pointer has not been initialised yet. So we do a copy assignment.

Why do we keep track of the memory in our state at all? This is directly related to the fact that we are utilising a stack memory layout.

Recall the layout of GameMemory. It has a cursor pointing to next available space in memory. In order for our game to remember where we left off allocating, this cursor is saved in the state. Otherwise the game would not respect previous allocations and overwrite existing memory.

Now, onto the platform layer.

Similar to the game layer we will store all state in one single struct as this helps keep everything organised and clean. This basic platform layer only takes track of the essentials: a pointer to the window, OpenGL context, the game code, and memory.

We define three helper functions. First a general quit function and error function. The latter accepts a printf-style string and displays a cross-platform message box through SDL. Second, a function to retrieve a file’s last write time that we will use to identify if it is time to reload the game library.

The next part deals with loading and unloading the game library. The entire game code is stored in a struct called GameCode that holds function pointers that we retrieve from the game library. We also store the library handle and a timestamp of the library’s last file write-time.

Loading the game library is pretty simple but we cannot use the library as-is, because it needs to be able to be written to in order for us to do live-compiling. We thus need to make a copy of the library which we’ll load instead. In this way, the original file can be written to at anytime. You’ll see in a bit why this is important.

Here we implement the DrawBox function — a simple OpenGL draw-call. Lastly a function that creates a valid PlatformAPI struct. For real games I discourage you of creating a separate function for every drawing mechanism. Instead I suggest populating a command buffer and sending that into the platform layer to consume.

The game’s memory will be allocated here. Notice the use calloc and not _malloc_, thus zeroeing out the memory at startup. You should remember why we explicitly do this.

In the main function we do the standard SDL-initialisation. This is the first time the game code is used in the platform layer. Since I described every function previously, the workings of this code should be self-explanatory.

Lastly: our game loop function which performs updating and rendering.

In this block all the magic happens:

If we notice that the game library has been updated, we unload and reload the game code. The induced delay is because there is a short time delay between the file update and restored access.