A function is deemed recursive if it satisfies the following three rules:

The easiest example of a recursive function would be calculating the factorial of a (natural) number.

As there is only a single recursive call, the recursive function will call itself a total of n times. Therefore its complexity is

A more interesting example is an algorithm for calculating the nth Fibonacci number.

Now there is a total of two recursive calls with two halting conditions (also called the seed values of the iteration). Noticeable is the curious amount of calls it takes for one recursion to end. If we graph the amount of calls vs. n we find a graph looking similar to an exponential function. 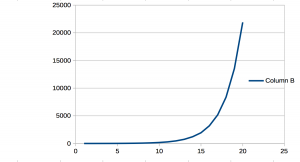 Since we assume the function to be exponential we can substitute:

, also called the Golden ratio. The second solution can be discarded as it is negative (approaches zero as n approaches infinity). Thus, the computational complexity of the Fibonacci function happens to be

. But as there is bias to powers of two in computer science the complexity may be formally declared

Another method of determining the computational complexity would have been sheer analysis. The iterations of a function exponentially increase by the amount of recursive calls. As the Fibonacci function calls itself two times per iteration, the analysed complexity would be

, which is roughly equal to our non-rounded solution.